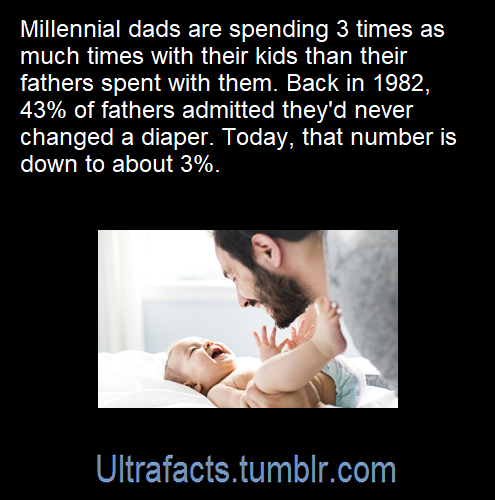 i hate this dude with a burning passion. its just the same girl all over again. hes some russian dude who lives in japan n everyone thinks this is dope but like its all the exact same piece. he makes a living out of this

this is what he makes per week. for drawing the same anime girl over and over again

yall really think this is dope

I’m not particularly fond or interested in his art, but hating an artist just because he/she made it, is just sad. He found a niche for himself, and apparently a lot of people seem to enjoy it. I applaud the fact that so many are willing to support the “free” art scene as it is, and I’m sure there is a niche for you as well.

Instead of being silly, and hating on some dude on the internet, direct your spare energy to something useful; focus on honing your skills. That’s the sole difference between him and you.

Bitch this is one of my favorite artist, fucking catch these hands.

Did OP ever recover from this?

There’s gonna be an anime movie in 2020 where the artist above is the movie’s Visual Designer.

I know this is a controversial question, so you don't have to answer if you feel like I'm putting you on the spot. Do side b Christians believe that God intentionally creates certain people to be lgbt, or, as the old cliche goes, do they see this identity as a side effect of a fallen world?

Idk if there is one official side b answer, but here’s my piping hot take.

It starts with a question: what does healthy human sexuality look like? Genesis 2 provides a glimpse into what that looks like. One man meets and is attracted to one woman, woman (also attracted to said man) meets man, man clings to woman, one flesh. They cherish and protect each other, kids raised, etc. Etc.

Of course, Genesis 3 kinda…says that isn’t anyone’s sexuality. “Yet your urge shall be for your husband, and he shall rule over you.” Since Genesis 3, human sexuality has been corrupted and defined by domination, struggle, and possession. That’s…not healthy, and not God’s plan, but a curse. This is reflected in Paul’s teaching in marriage. The crucifix is the marriage bed.

Really,the only healthy sexuality is expressed in marriage, between one man and one woman, and only those two people. In heaven, they will neither marry nor be given in marriage.

This combined means a few things:

2. Marriage isn’t the end all be all of life. Jesus condones being a single pringle for the sake of the kingdom, and Paul advises against marriage as well.

3. Marriage is a temporary thing on earth.

So, I’d like you to look at all the straight people around you. Do they live this out? No? Hey, their sexuality isn’t exactly the Biblical standard either.

So, I guess the long and short of it is yes, my sexuality is f*cked up and a result of post fall sin, but like…so is everyone else’s.

TL;DR: asexual people may have the healthiest sexuality. 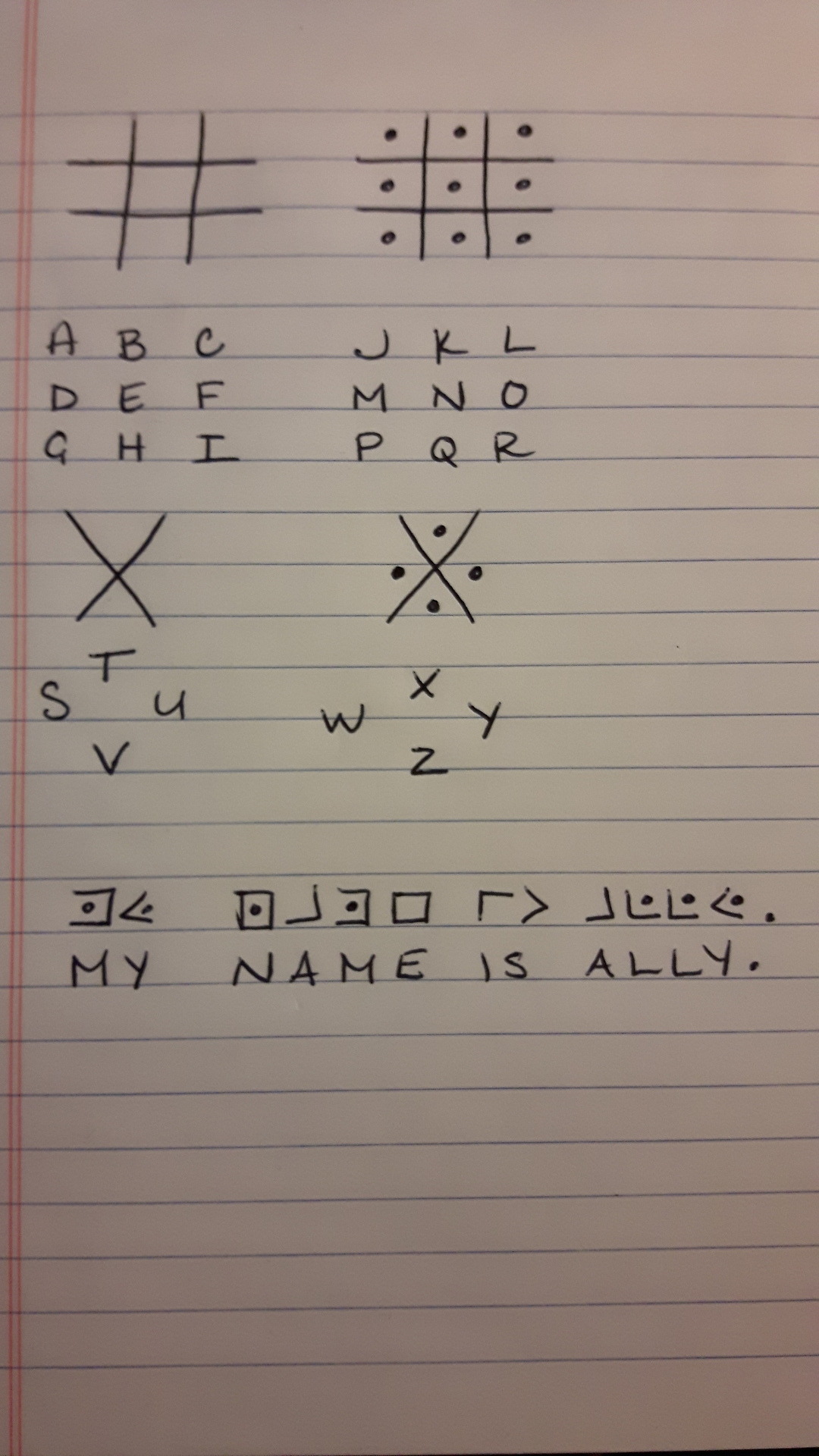 Back in middle school, my friends and I used a very simple coded language for writing secret messages. I saw some posts about needing to hide one’s beliefs from partners/bosses/parents so I wanted to share it with you! These would also be great to incorporate into sigils since they are simple lines and dots.

Reblogging this again cause it’s so cool

That’s the Pig Pen Code! I used to do this with my little brother, when we were kids too! 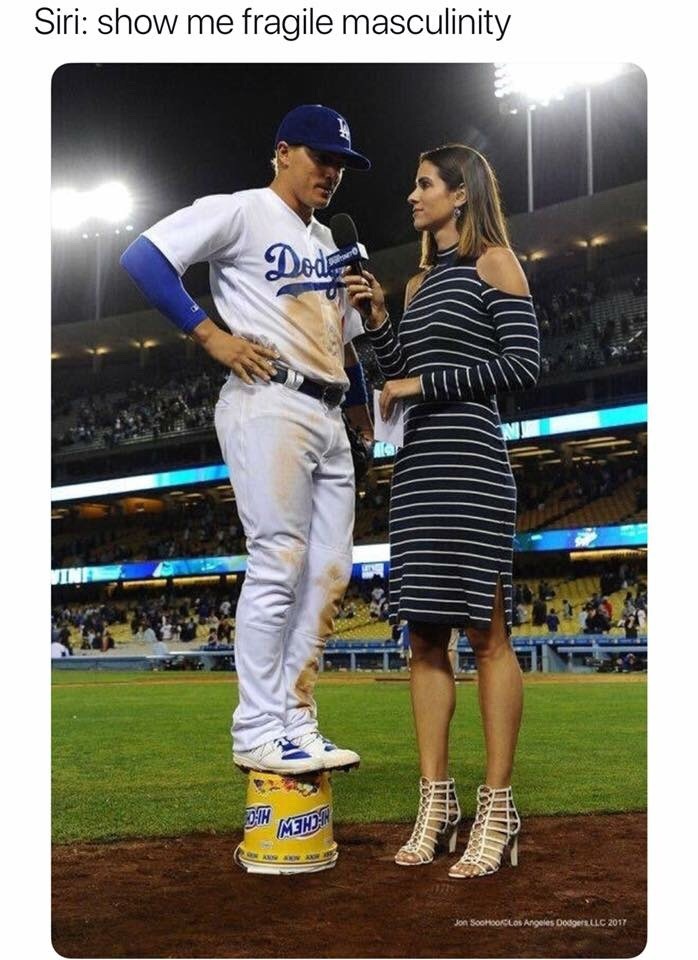 This👏🏼 was👏🏼 a👏🏼 joke.👏🏼 KIKÉ HERNANDEZ SET UP THIS PICTURE AND POSTED IT ON HIS TWITTER HIMSELF to make fun of how short he is. Literally the opposite of fragile masculinity. Everyone stop ruining his good name he is the sweetest goofball in all of baseball he deserves better I love him.

Sharing for context. I pretty much figured there was a joke here or you wouldn’t see the bucket.

It’s so fucking obviously a joke. Y’all are so desperate to act like every little thing men do is literally killing you. 

What if Paul is right and we are all worldly? He says anyone who like the world will go to hell. Does that mean we are all going to hell...?

I don’t think Paul Washer thinks we are all going to hell. If I remember correctly he loves ice age and nacho libre.

Honestly this is something to pray about because I don’t have a concrete answer, friend I can’t speak for God here. If God truly hates all forms of media and we will go to hell for liking any of it then that is Gods way and we can’t change that. Pray that He gives you the truth so that you can know, that’s the only advice I can give.

Hey Anon…stop basing your life on whatever Paul Washer says. Look to the Bible. The Scriptures are our only infallible rule for faith and life. Basing your ethic and your theology on what a pastor you’ve never met said is contrary the what the Bible teaches. Don’t trust the opinions and traditions of men… trust God.

The bible says that we should not be conformed to the world and it also says that the devil is decieving the whole world in revelation as well. If its in the bible then its true so whatever the world loves we shouldn’t be taking part in that.

You have a Tumblr… that alone would condemn you, if you were actually trying to be consistent with this idea.

ketsycola
Why do we specifically have church on Sunday?

For Christians, it cuz Jesus rose on a Sunday

So we celebrate His resurrection on Sunday

Every Sunday is a mini- Easter 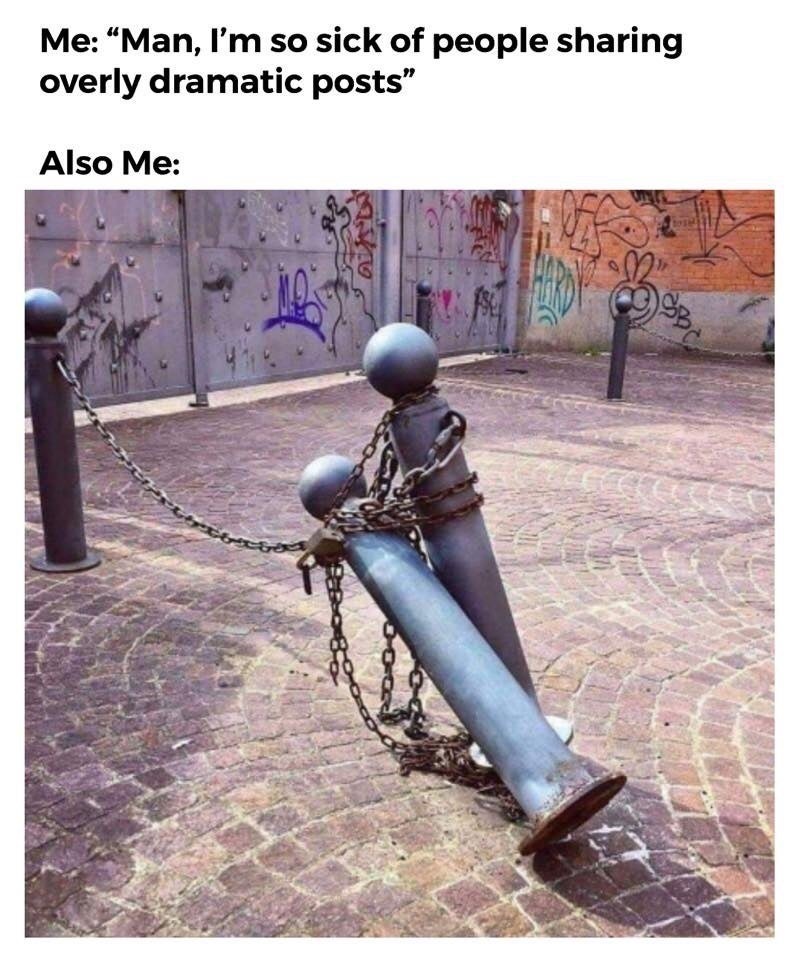 Shrekist: the knight saves the princess but doesn’t slay the dragon (it’s on his to do list), the dragon and the knight’s noble steed fall in love and it’s a metaphor for Disney bad

traditionalist: the knight saves the princess and slays the dragon

feminist: the princess saves herself and slays the dragon, who is a metaphor for toxic masculinity

del toroist: the princess and the dragon fall in love and slay the knight, who is a metaphor for war, bigotry and/or toxic masculinity

There is a difference. Learn it. 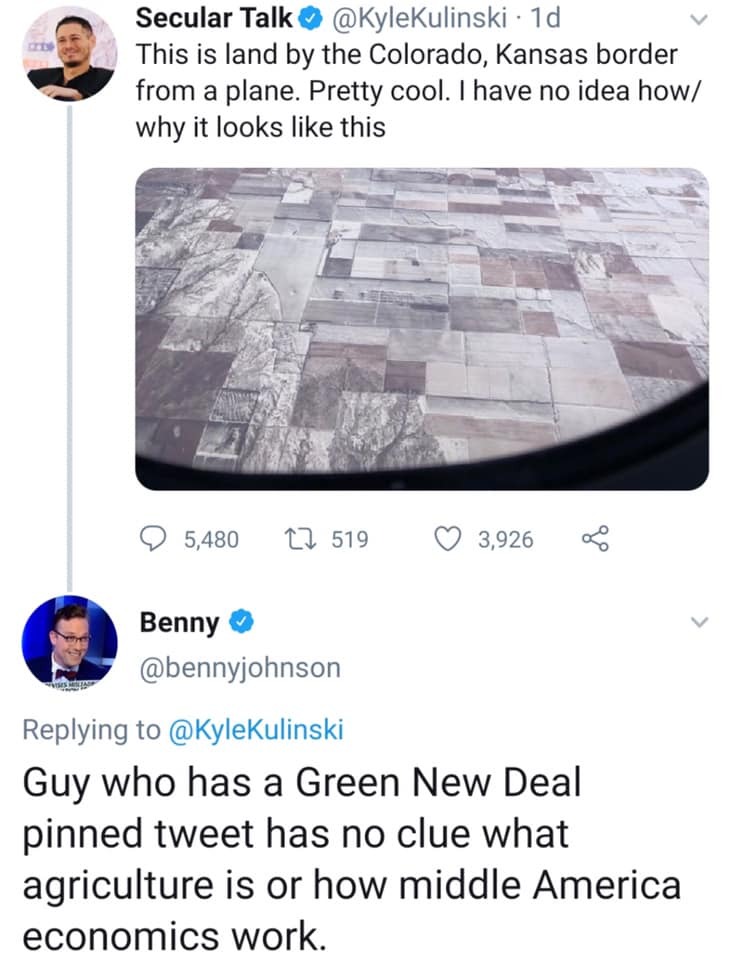 Explains everything though, doesn’t it? Why the electoral college matters, why every state gets the same amount of senators, why most socialists live in urban areas and why so many urbanites don’t understand any of those things.

Guess what, if Texas or Florida goes blue in the next 4-10 years (which is more and more likely by the day) then the Dems can win every presidential election without any mid western states, and render a republican presidency impossible.  The EC benefits you now but long term it helps the democrats

THe EC wasn’t designed to protect the midwest, the midwest didn’t exist when the EC was designed.

Did you just brag about the possibility of the Midwest being silenced and powerless under rulers of your choice? About the literal breadbasket of America?

Two of which are already blue states typically by the way, others often times swing. Missouri is the only super typical red.

Rural and urban areas have always existed and it was written with both in mind. Don’t be so rude

It’s funny seeing all these articles like “Why are women so attracted to dad bods???” like maybe because we’re predisposed to being attracted to healthy bodies and dehydrated abs aren’t healthy??

Also I saw a post complaining about women liking dad bods but only Jason Momoa dad bods and like…….. so?????? If a guy says he likes thicc girls Imma assume he means someone curvaceous and not morbidly obese lmao tf yall on

I don’t want to fall into a man arms and feel like I landed on a boulder. His arms need some fat for the shock absorption. 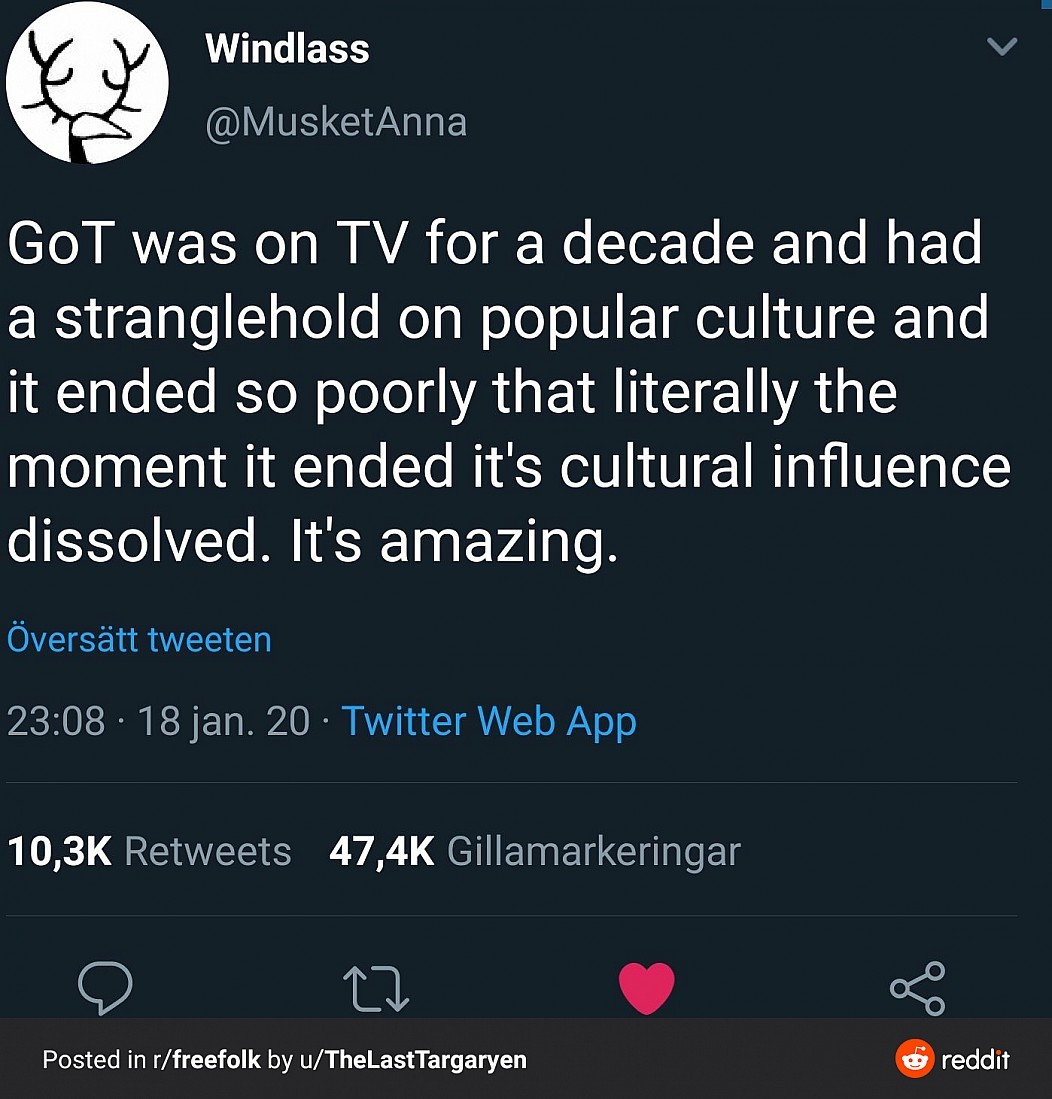 Zen & Yoosung: *without any regard for their personal safety whatsoever* 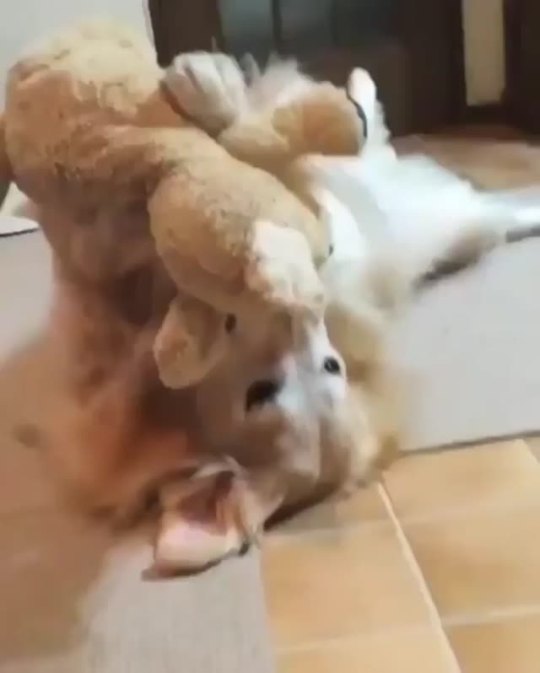